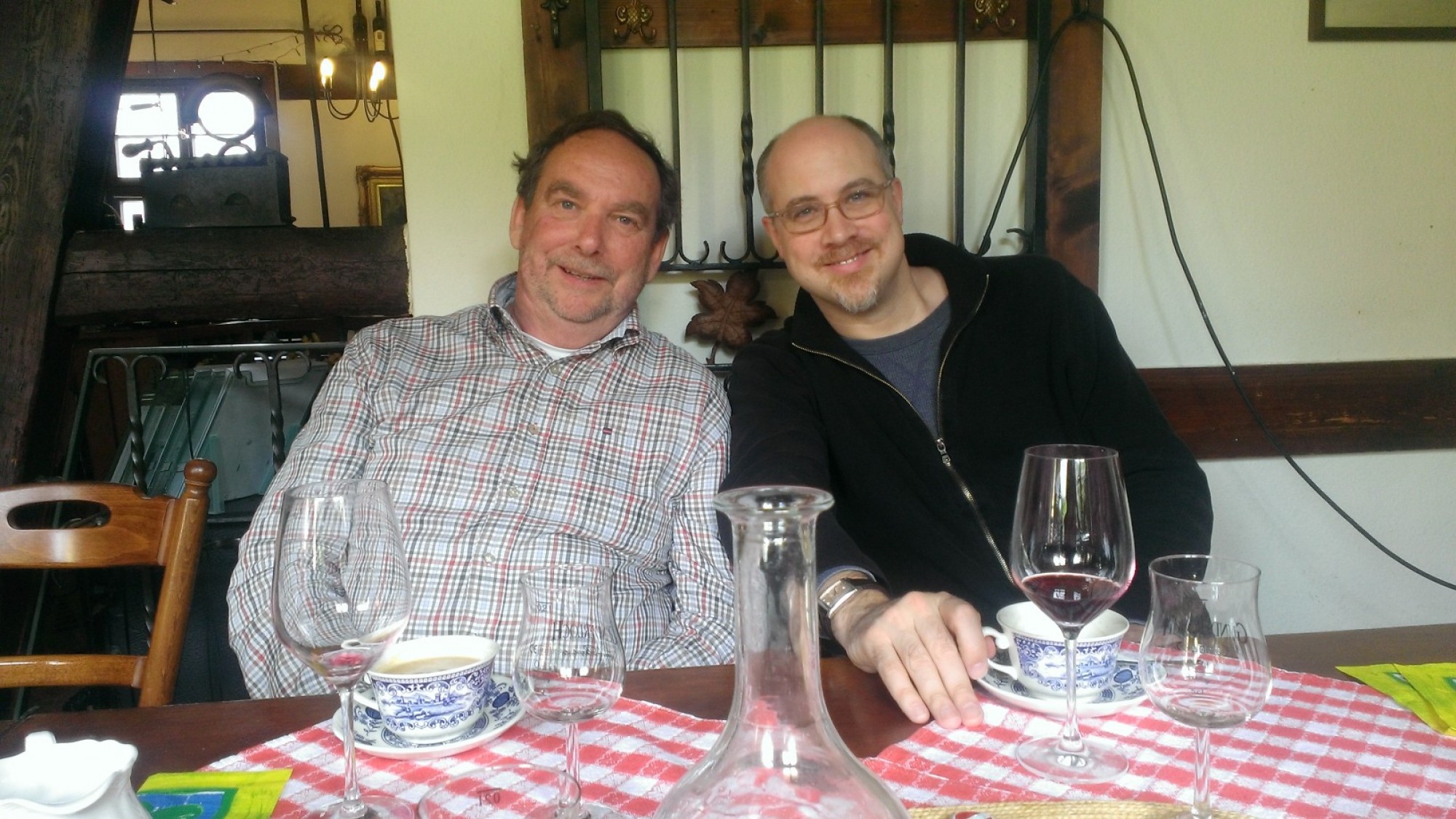 I worked in a wine store on New York’s upper west side in the 1990s. It was called Nancy’s Wines For Food and I learned the wine trade there by working my way up from cellar rat to manager. The original wine buyer was Willie Gluckstern. Given the personnel, it won’t surprise anyone to know that we had the largest selection of German wines in New York, over 100 of them at our peak. A lot of it was Terry Theise wine, thanks in large part to the efforts of David Bowler at Skurnik. Rudi Wiest’s wines did not have a large presence in New York in those days (unlike today, thank you all very much). But there were always two wines on our shelf from Rudi’s portfolio: Robert Weil Estate Trocken and Gunderloch Jean-Baptiste Kabinett. Those placements were sacred; we loved to drink the wines ourselves and consistently stocked them. As a result, Fritz Hasselbach, the winemaker at Gunderloch, came to visit the store periodically. Over time, he struck up a friendship with us. Nancy and Willie went on trips to Germany and cited his family’s estate as their favorite visit. When I started working for David Bowler in 2004 and the time came for me to start traveling to Germany as a buyer myself, I made it a point on every trip to roll into Gunderloch’s walled courtyard in the tiny Rheinhessen village of Nackenheim.

My visit each year to Gunderloch is not just a stop at a winery; it is a respite from the journey—often the first place I go to after the plane lands and the bags have been stowed. The tasting room is small and cozy with two long tables arranged end-to-end, wood paneling on the walls, and windows overlooking the garden. Members of the family bustle around, fixing lunch, opening bottles, chatting, joking, and thoughtfully discussing the vintage at hand. Fritz’s wife is named Agnes (née Usinger), and the estate comes through her family. It was the creation of her visionary grandfather Carl Gunderloch, a banker with a taste for wine. Fritz was born and raised in Nierstein a short drive down the road, married Agnes in 1974, and took over winemaking duties at Gunderloch in 1979. He was always fond of saying that Agnes owned the place; he was just the winemaker.

Fritz’s “golden age,” so to speak, was in the 1990s, when the wines he was making became famous internationally. He became the “300 Point Man” when the Wine Spectator awarded him three perfect 100-point scores for his TBAs (in 1992, 1996 and 2001). I have always found it surprising that he was the first winemaker in the history of the magazine to do that. He was also instrumental in creating (and endlessly debating) the Grosses Gewächs idea at the VDP. He butted heads so many times with VDP members over the labeling that he almost quit the consortium. We used to laugh about it; or at least I used to laugh as he told me about his frustrations with certain individuals whom he felt were being stubborn and unreasonable. But he was a true Democrat at heart and relished the process, I believe. Why else would he put himself through the aggravation?

Fritz and Agnes’ three children helped with the harvest and operations all through their growing up. In adulthood, the oldest daughter Kathrin went to work for Lufthansa but the younger siblings both wound up in wine. Stefanie got her oenology degree and “ran off” to Austria with Alwin Jurtschitsch, becoming his wife and cellarmaster. That left a gap at Gunderloch, for she had been Fritz’s winemaking heir apparent. Her brother Johannes wound up having to choose: come back home and take over the winery or continue his education in other fields, as he had intended to do. He chose to come home. After the necessary practical education, he became the official winemaker at Gunderloch in 2012.

In his late 60s, Fritz’s health was often an issue. He was a large man, ate and drank heartily, worked very hard and traveled endlessly to promote his wines in far-flung markets—Asia, Europe, the Americas. He was a gold star VIP at Lufthansa and seemingly “in” with the airline somehow. (I don’t know exactly how Kathrin got her job there, but being Fritz’s kid couldn’t have hurt). I can’t help thinking that the relentless travel impacted Fritz’s health in the long run, but perhaps I have it reversed; perhaps it kept him youthful and vigorous and interested in the world. Certainly, of all the Germans I have met, he was one of the most cosmopolitan. He felt very at home in New York City. He had good taste in restaurants and hotels. He knew a good cup of coffee when he had one. He preferred taxis to trains. And when he got home, he liked to unwind by riding his motorcycle. The sight of him squeezed into a leather jacket on the seat of his bike is a visually delightful memory that I cherish. A cartoon illustration of it is rendered on the back label of Fritz’s Riesling, which is named for him.

But he wasn’t a cartoon. He was a human being of a rare sort who possessed a very warm heart, a fantastically wry sense of humor, and an endless interest in the world around him. I have always thought of Fritz and his wife and children as my second family in Germany, the people I could call if I got in trouble, the house I would seek out for safety and kindness. My friendship with Agnes is candid and trusting, my relationship with Johannes is heartfelt and important, going back many years and many wines. It will continue to feel like that, always. But it started half my lifetime ago with Fritz, and for me his presence at Gunderloch will always be sweetly felt and keenly missed.