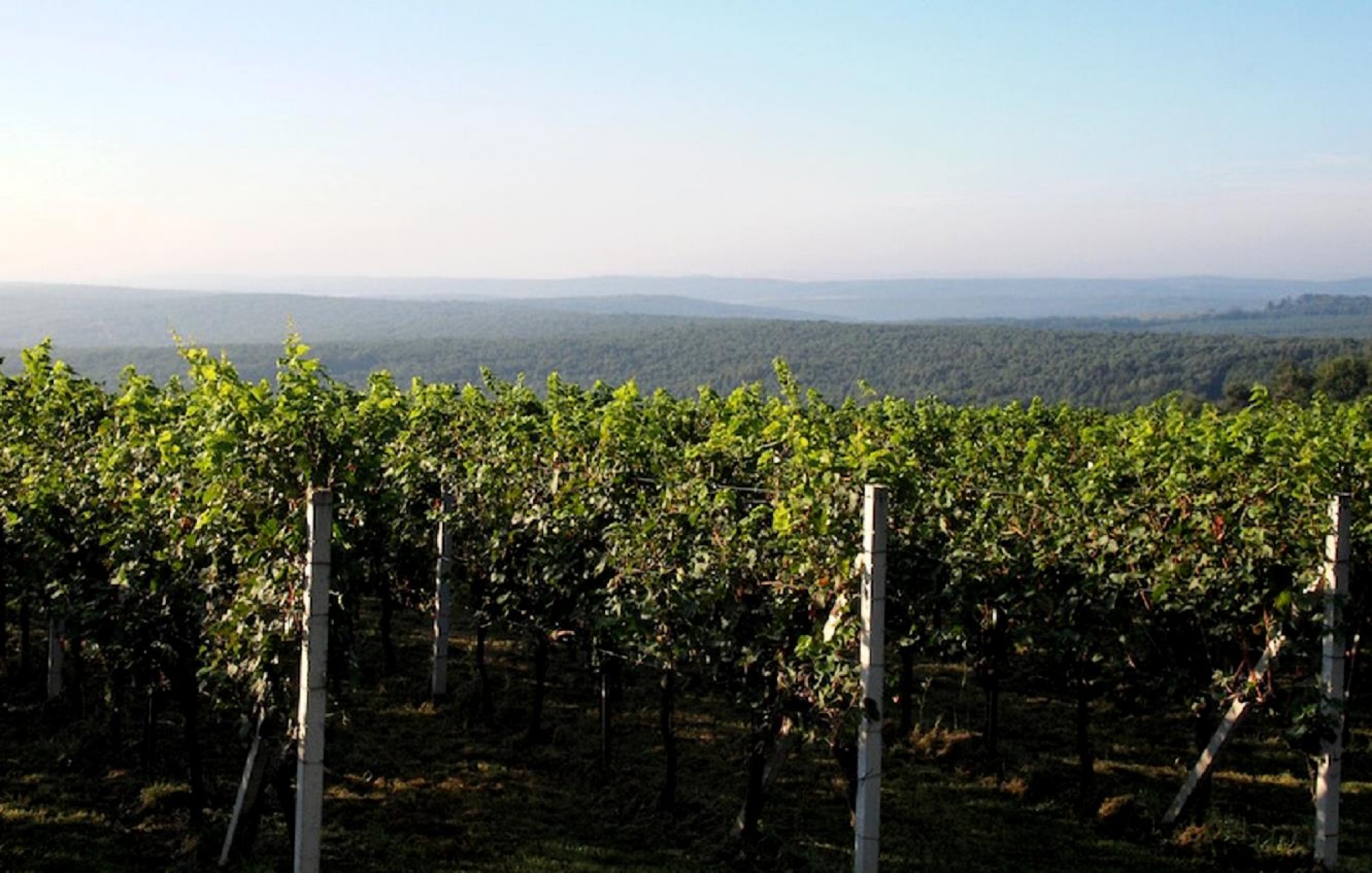 What’s the most beautiful winegrowing region specializing in reds that you’ve never heard of? My guess is that it could well be the dramatic hill country of the Eisenberg, close to the Hungarian border in the southeast of Austria. Steep vineyards alternate with dense forest and meadows, and the main vineyard sites are dotted with charming old winemakers’ houses called Kellerstöckel.

When Austrian wines returned to international wine markets during the 1990s, it was the dry white wines, most notably the grüner veltliner from the Wachau on the Danube and the neighboring regions of Kremstal and Kamptal that caught the limelight. “Grooner” was the nickname New York City somms called it. However, that would never have happened had those wines not had such distinctive aromas (famously white pepper, but also veggies like snow peas and green beans) and such a distinctive balance (quite close to unoaked Chardonnay). A couple of years later in many markets around the world and Austrian Grooner was suddenly “in” and remains so.

When the reds began to catch up about a decade ago, it was the vibrant and aromatic wines of the blaufränkisch grape (a.k.a. kékfrankos in its native Hungary and lemberger in Germany) that generated the greatest interest. That doesn’t surprise me at all. The quality of the best examples from the Austrian state of Burgenland was often good, prices were friendly and the wines tasted like nothing else. Different aspects of them resembled wines from different grape varieties. The black pepper aroma resembled syrah from the Northern Rhône, the crisp acidity resembled Gamay from the best cru of Beaujolais, and the finesse of the best examples was rather like that of great pinot noir from Burgundy. Those were all positive associations and the combination of them made it plain that the new wines were not copies of classics from a well-established region. The breakthrough red was arguably the 2006 Neckenmarkt Alte Reben (Alte Reben means “old vines”) from the Moric winery founded by ex-casino croupier Roland Velich. Critics showered it with high scores and praise in 2009 and 2010 and suddenly Blaufränkisch had arrived in the company of the world’s great wines.

At the same time, the small region of Eisenberg, where there are just 500 hectares of vineyards, of which 36% are planted with Blaufränkisch, was lagging behind. Few producers had more than a couple of hectares of vines, as much of the region had suffered until 1989 from being directly next to the closed Hungarian border. Most winemakers were disorientated after recently losing its main market of day-trippers from the nearby city of Graz who traditionally filled the trunks of their cars with cheap unpretentious wine.

By the time I visited the region in June 2012, a group of young winegrowers were already pushing the envelope to improve the region’s reds and establishing a new identity on the domestic market. The group they formed had already succeeded in getting two new DACs (or appellations) for blaufränkisch reds introduced in 2010: Eisenberg and Eisenberg Reserve. And yes, although the dominant soil/sub-soil type here is green slate, there are veins of iron. The combination of this soil and the coolest (and wettest) climate in Burgenland due to the high altitude (vineyards up to 440 meters above sea level) gives the wines their sleek and fragrant personality

The stage was set for a winemaking revolution. It began with the move away from new oak for ageing and towards lower alcohol levels (12.5% is now typical and 12% quite common for regular Eisenberg DAC wines) pioneered by the then almost absurdly young Christoph Wachter of the Wachter-Wiesler winery in Deutsch Schützen. For him, this was all about letting the floral (violets and lilac), black fruit (elderberry and sour cherry) and spicy aromas (black pepper and clove) from the grape shine, and allowing the dry tannins and bright acidity of the grape to speak clearly rather than being smothered by flavors extracted from new oak barrels.

These wines recently began attracting international attention in much the same way Austrian Grooner did 20 years ago. Thomas Kopfensteiner, also of Deutsch Schützen, is the most dynamic and exciting of those in the following pack, but watch out for Jalits (Badersdorf), Poller (Deutsch Schützen), Schützenhof (Deutsch Schützen), Straka (Rechnitz) Rainer Stubits (Harmisch) and Walter Stubits (Eisenberg)

It is a measure of the openness of this group of producers that they easily seemed to accommodate the Krutzler winery, also in Deutsch Schützen. From the first vintage in 1992, Reinhold Krutzler’s “Perwolff” (the original name of Deutsch Schützen) had rapidly become the first collectible wine from the region. The style of this wine—with pronounced new oak and a much more muscular body that was partly the result of blending in a few percent of Cabernet Sauvignon—might look like a contradiction of the group’s declared aims.

Ex-sommelier Uwe Schiefer, who founded his winery in Welgersdorf in the mid-1990s, remains the only lone wolf of the region, although he was one of the first to make world class Blaufränkisch reds in the new style. Arguably his wines are still the best of their type, though he now faces very serious competition from the new kids on this rugged and beautiful block. —Stuart Pigott, Contributing Editor