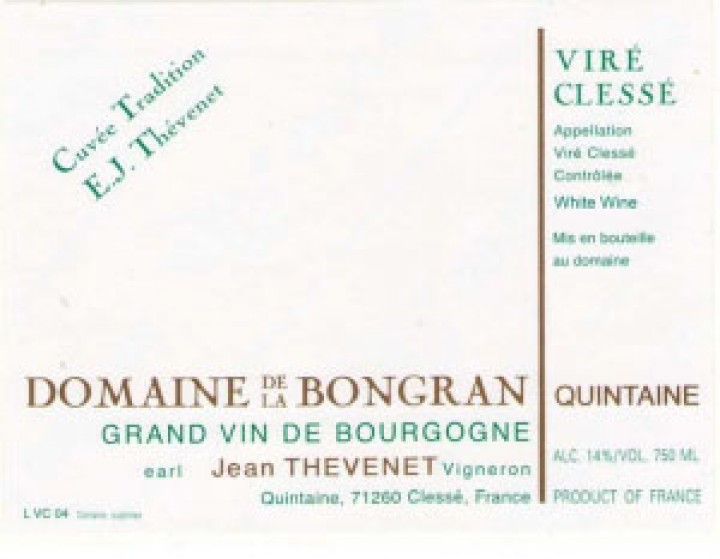 100% Chardonnay. Bongran is Thévenet's original home estate (Domaine de Roally, also in Viré-Clessé, was added later). Cuvée Tradition is its single bottling of dry white wine (in certain vintages, a sweet botrytized wine is made). The old vines are organically farmed and harvested manually and notably late at a very high ripeness level. The grapes are pressed very slowly and gently. After settling, the juice is fermented in tank with indigenous yeasts, very slowly, taking up to two years to finish; there are often a few grams of residual sugar remaining in the wine. The wine is aged in tank only, then in bottle for several years before release. It has an extraordinary richness of flavor and texture along with firm acidity and minerality.

94+ points
"The 2015 Viré-Clessé Cuvée E. J. Thevenet opens in the glass with notes of fresh peach, confit lemons, white flowers and clear honey. On the palate, it's medium to full-bodied, satiny and layered, with striking concentration, lively acids and plenty of well-concealed structure. Long and penetrating, this is a Viré-Clessé with considerable potential for the long haul, and though it will be released later this year, simply because the winery hasn't anything else to sell, I encourage readers to be as patient as possible. Gautier Thevenet suggests that this evokes the 2005 vintage, but it also bears more than a passing resemblance to the 1989—which is drinking at its peak today, age thirty. "
William Kelley,
Wine Advocate
, issue 244 Aug 2019
SKU/Code:
DB0350-15
Product Line:
White
Varietal:
Chardonnay
Farming Type:
Organic