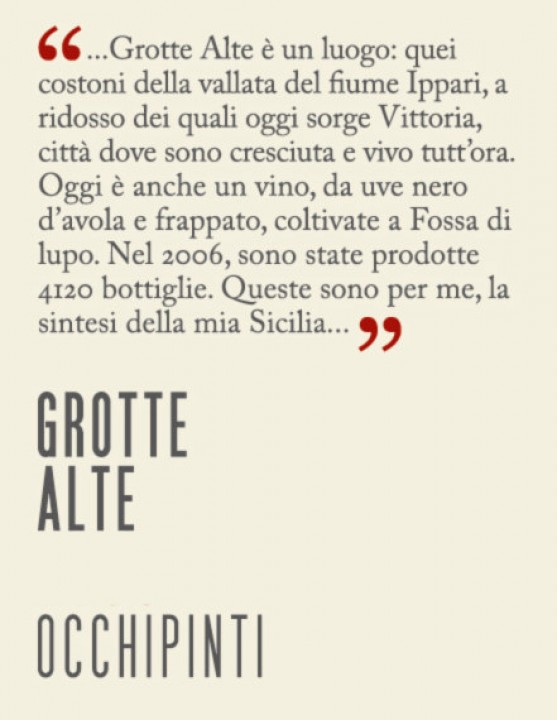 50% Frappato/50% Nero d'Avola. Grotte Alte is Arianna's only DOCG wine, in this case Vittoria's most famous, Cerasuolo di Vittoria, a blend of the best native varietals, Nero d'Avola and Frappato. "Grotte Alte" is named for the limestone ridges on which the Occhipinti estate lies, straddling and combining both Mediterranean and mountain influences, with red and sandy clay soils over limestone at about 280 meters. Coming from a selection of older vines, a longer maceration and barrel aging, the Grotte Alte is essentially the "grown-up", appellation-designated version of the "baby" SP68 red IGT wine. Beginning in the 2013 vintage, it will be made annually (now that Arianna has built a bigger cellar).

Trained in a mix of alberello and guyot, the vines average 40 years old and are organically farmed and hand harvested, generally in the first 10 days of October. The fruit is destemmed and fermented with indigenous yeasts, macerating with the skins for about 30 days before pressing. The wine is aged for around 30 months in a 25-hectoliter Slavonian oak botte before being bottled unfiltered; production is approximately 325 cases.