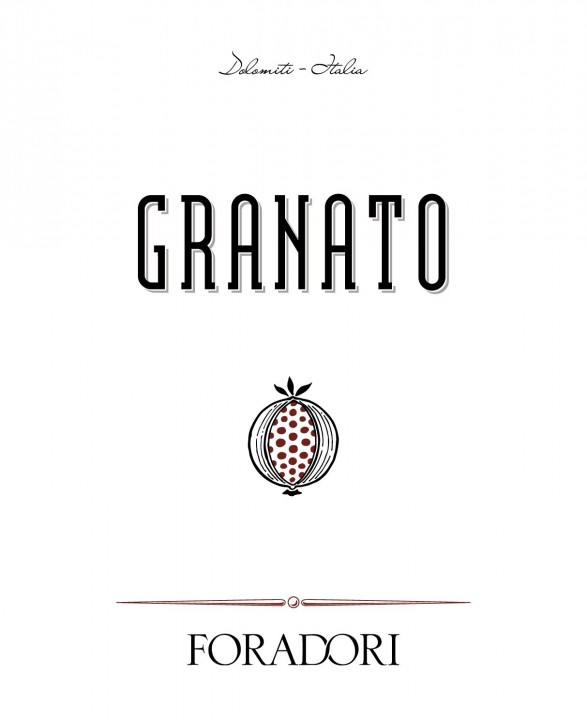 100% Teroldego. Granato is the historic flagship of Foradori, the wine that put the Teroldego grape and Foradori on the international wine map. Elisabetta first made and bottled it in 1986. Granato comes from 3 parcels across 4 hectares of the oldest estate vines, on the most gravelly of the alluvial, Dolomitic limestone soils. The vines were planted from 1938 to1956 in pergola; this old and genetically diverse material is the source of all cuttings for vine replantings at Foradori. The soils are particuarly gravelly, pebbly variations on the classic alluvial, Dolomitic limestone terroir of the Campo Rotaliano plateau. The farming is certified-biodynamic and the harvest by hand.

The bunches are partly destemmed and partly left in whole clusters; fermentation is spontaneous with indigenous yeasts and without sulfur in open wooden vats. The maceration is several weeks with a cappello sommerso or "submerged cap", rather than punchdowns or pumpovers. The wine is aged around 15 months in large, old botti of up to 22 hectoliters. It is bottled without fining or filtering and its only small dose of sulfur and aged for another year. Like all Foradori wines, Granato is classified as IGT VIgneti delle Dolomiti. "Granato" translates to "garnet" in Italian but is mainly a reference to the pomegranate or melograno, which like the grape has grown in the Mediterranean since ancient times. For the Foradoris, the name invokes the bright, juicy, complex, tannic, self-contained energy shared by these two historically, culturally connected fruits.

Note that the last Granato vintage with any new barrique was 2000 and the last with used barrique was 2008, contrary to popular belief, which is based on its early years as a more internationally styled wine. Granato evolved over the decades, as did the farming--from conventional to organic to biodynamic--and the winemaking--from extractive techniques and heavy new-oaking to a lighthanded, terroir-focused approach.

98 points
"Somehow this manages to be very powerful and concentrated, expressive and wild all at once. Violets and wet earth mingle in the complex and very youthful nose. What a breathtaking interplay of fruit, tannin and mineral freshness this has on the compact, but only medium-bodied palate. Enormous vitality at the firework-display finale! From biodynamically grown grapes with Demeter certification. Drinkable now, but best from 2024."
James Suckling,
James Suckling
May 2022
96 points
"Minty herbs and camphor give way to black currants and savory spices, as the 2019 Teroldego Granato blossoms in the glass. This is polished and elegant with a deep inner spiciness and depths of dark red fruits. Cooling acids and minerals help to lift the expression, holding the 2019’s power in reserve, and creating a youthful yet totally harmonious expression. While structured and built for the long term, I recommend checking in on at least one bottle to enjoy the intensity of its primary fruit. This is an undeniably classic Granato in the making. In 2019, the Foradori family used 30% whole-cluster fruit while fermenting the Granato."
Eric Guido,
Vinous Media
March 2022
SKU/Code:
DB0134-19
Product Line:
Wine
Red
Varietal:
Teroldego
Farming Type:
Biodynamic