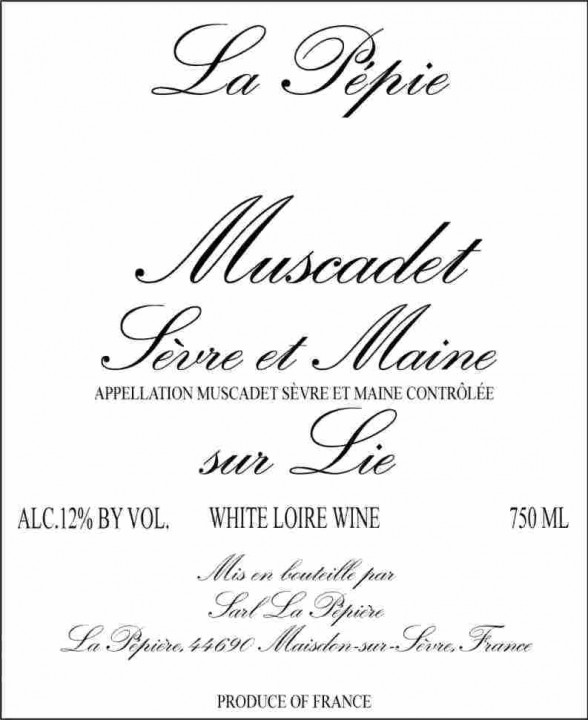 100% Melon de Bourgogne. In 2016 for the first time, Pépière's classic, earliest-released Sur Lie bottling saw an addition to the label, the "La Pépié" moniker, because of the necessity of adding non-estate fruit to this bottling (Pépière had 85% devastation of their own crop in 2016); 2017 was also very challenging, though slightly less extreme in terms of loss, so "La Pépié" appears again because so does a little purchased fruit. Otherwise, the wine came as always mainly from the central 10-hectare vineyard of the estate on sandy, granite-based soils. Farming is organic and harvest by hand, as for all of the estate vines.

As with the rest of the Pepière Muscadet wines, the fruit is direct-pressed and the juice settled naturally for 12 hours. It is then fermented in stainless steel tanks with natural yeasts; the wine is aged on its lees in large, underground vats until bottling without fining or filtering. Use of sulfur is moderate to very little. For this bottling, Pépière bottles and releases it in several stages, so the first tranche sees about 4 months on the lees before release, increasing to up to 6-8 months for the last tranche. It is the benchmark style of the estate: racy, crisp, acid- and mineral-driven, with a bare hint of richness from the sur lie factor, very much indicative of Pépière's granite-based terroir and clean, natural winemaking style.