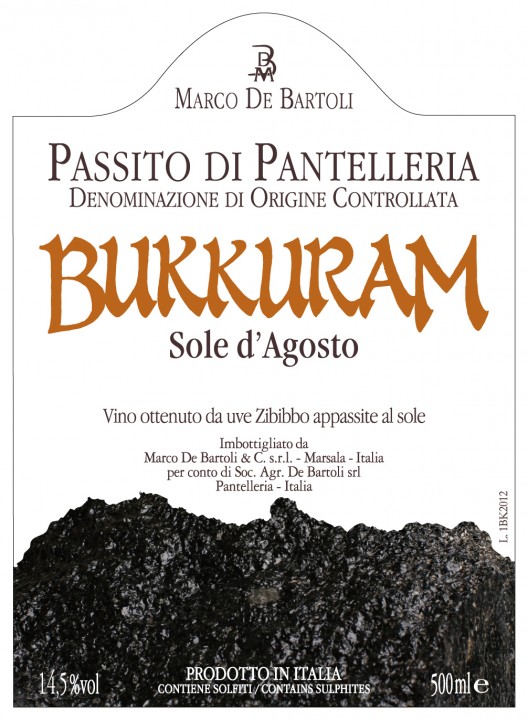 100% Zibibbo. Mainly from 35-50-year-old, bush-trained vines, grown very low to the ground on very light, sandy, brown, volcanic soils in the walled and windy clos of the De Bartoli’s small Bukkuram estate on the island of Pantelleria. Two dried-grape passito wines, Sole di Agosto and Padre della Vigna, come from this vineyard, which is organically farmed and harvested by hand. The harvest takes place in two stages. The first is in mid-August—in a normal vintage, these bunches are dried on mats in the sun for two weeks. The second harvest is several weeks later. This riper fruit is direct-pressed and spontaneously fermented; the sun-dried bunches are then destemmed and added to the fresh wine for a three-month maceration. That wine is aged for six months in oak barrels and released as “Sole di Agosto” or “Sun of August”, a light, fresh style of sweet wine of around 180 grams/liter of residual sugar.  In very special vintages, De Bartoli makes the rare “Padre della Vigna” (”Father of the Vineyard”) instead: the first-harvest fruit is dried in the sun for a minimum of four weeks before being added to the young base wine for three months of maceration. This wine is aged for a minimum of three years, and often much longer, in barrel. It usually comes in around 200 grams/liter RS and is a much more complex expression of Zibibbo. Generally speaking, only one or the other of the two passitos is made in a vintage.