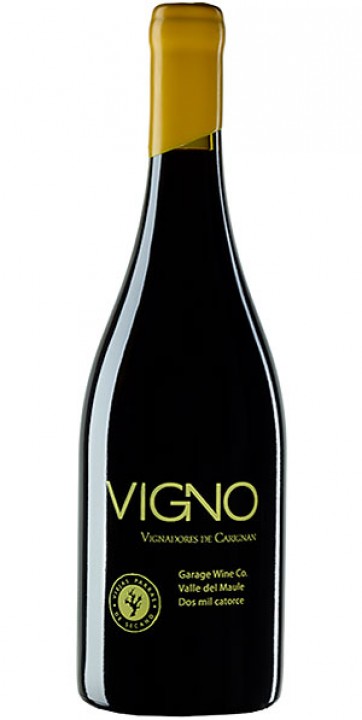 Vigno is an “appellation” that MOVI members created several years ago to classify traditionally-made, naturally-farmed Carignan-based field blends. The fruit for this wine—primarily 70-year-old Carignan, with Garnacha and Mataró—comes from Truquilemu, a site in what most consider to be the “freshest” corner of the Maule in Chile's Coastal Range, a much older mountain range than the Andes, and slower to cool. The sub-soils here lie atop granite bedrock. These vineyards are dry-farmed, and all work is done by hand and by horse.

A portion of the grapes were lightly foot trodden rather than crushed/destemmed, providing floral lift and added tannin. Fermentation took place in open-top fermenters, with manual punch-downs; barreled in neutral oak for two winters, and bottled in recycled bottles. 275 cases produced.

94 points
"Always a noteworthy example in the Vigno association, the 2015 Vigno from Garage Wine Co. is one of their 11 single-vineyard bottlings. It's produced from eight barrels of Carignan and one of Mataró (Monastrell) with traces of País from an old field blend in one of the freshest corners of the Maule "secano interior" in Truquilemu (the other two are Huerta de Maule and the coastal part of Cauquenes, in Pilén). There is a faint animal touch of leather and cured meat and a rustic twist of tree bark and earth. The palate is serious and has an austere texture provided by the granite soils; this could be lighter and fresher. This is the same base as the Lot #67, as this comes from their largest vineyard. 2,315 bottles were filled in December 2016."
Luis Gutiérrez,
Wine Advocate
, October 2018
SKU/Code:
DB1810-15
Product Line:
Wine
Red
Varietal:
Carignan
Farming Type:
Organic