Lombardy the largest and most populous region of italy, and the driving force behind the country's post-Second World War economic boom, is the dynamo which has given Milan and its hinterland one of Europe's highest standards of living. Visitors driving across the great Lombard plain of northern Italy between the Ticino of southern switzerland and the river Po (see map under italy) get little sense of a thriving agriculture, but the region is a viticultural centre of some importance: its annual production of just over 1.1 million hl/28 million gal (with doc wines accounting for more than a third of the total) is larger than that of such famous wine regions as friuli, trentino-alto adige, umbria, or the Marche, areas whose more bucolic landscapes suggest a greater significance for the vine.

Lombardia's centres of viticulture are off-centre geographically—in the far north, in the far south, and in the far east—all well off the region's main axis of communication. And the fact that each of Lombardia's three major viticultural areas cultivates different grapes and makes wine in a completely different style from the others does little to clarify the image of Lombardia wine: the region has neither a key grape nor a key wine to make it better known, and its sheer size and disparity are marketing handicaps. This is compounded by the fact that most of the region's wine is consumed (not wholly critically) by the denizens of Milan and its environs, which means that there is little pressure from the more competitive export markets to buy the wines. Good wine is none the less produced in Valtellina, Oltrepò Pavese, and Franciacorta.

Other DOCs include Lugana, whose Trebbiano-based white wines are produced to the south of lake Garda. Botticino and Cellatica are red blends (the former with a slight suggestion of sweetness) from schiava, barbera, and marzemino grapes grown in the province of Brescia and served with the local versions of pot-au-feu or wine-laced stews. Garda and Garda Bresciano, introduced in the late 1990s, cover a wide range of varietal whites (Pinot Grigio, Chardonnay, Garganega, Tocai, etc.) and reds (Merlot, Cabernet Sauvignon, Corvina, Marzemino, and others). The wines tend to be light but pleasant, especially if consumed overlooking lake Garda. 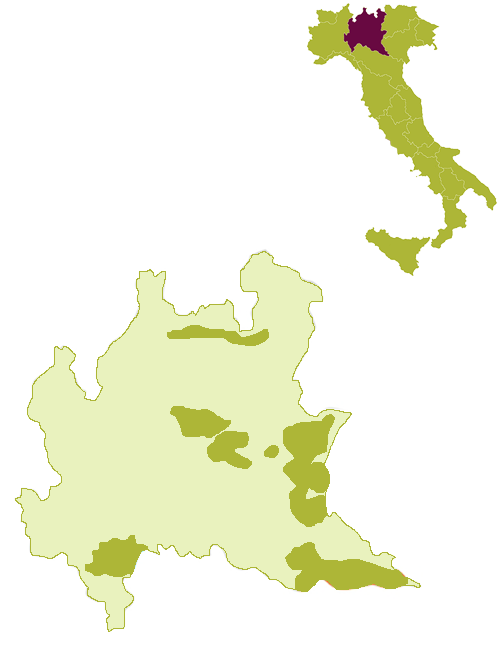