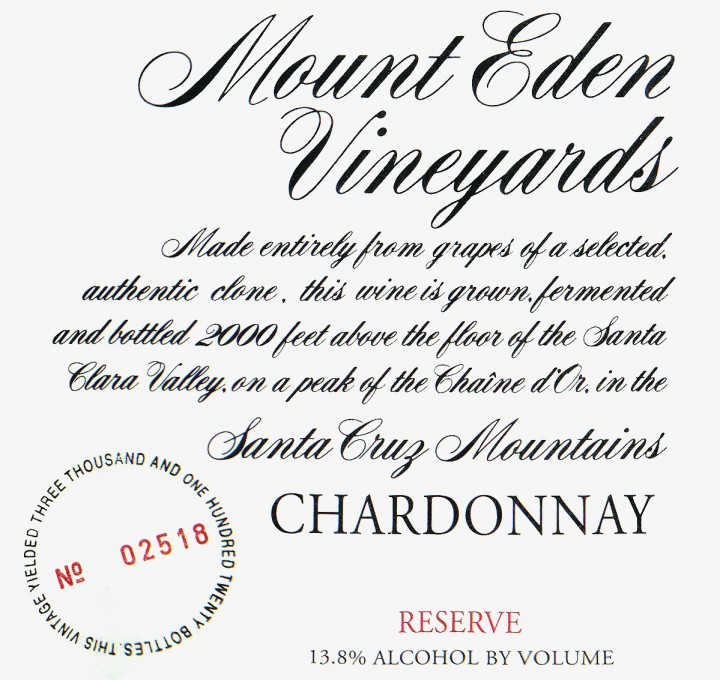 In the late 1940s and early 1960s, Martin Ray planted six acres of Chardonnay vines propagated from a Burgundian selection grown in the original Paul Masson vineyard. 20 acres of Estate Chardonnay are now farmed at Mount Eden with yields averaging one to two tons per acre, far below the average for Chardonnay in California.

The Estate Chardonnay grapes are harvested when slightly yellow to yellow-green and are pressed without crushing. All of the juice is barrel-fermented in new and one-year-old French Burgundy barrels, where the wine undergoes full malolactic fermentation and then ages on the lees for ten months; the difference in making the Reserve Chardonnay and the Estate Chardonnay lies solely in what happens next.

In a curious practice sometimes used in the making of renowned white Burgundies, Chardonnay that has been aged for ten months in barrel is then put it into a stainless steel tank with all the gross lees where it remains for an additional ten months. During that time, all of the sediments (mainly yeast lees) are magically absorbed into the wine, similar to the process of making Champagne.  The Reserve Chardonnay is composed of eleven barrels of Estate Chardonnay that completes this process.