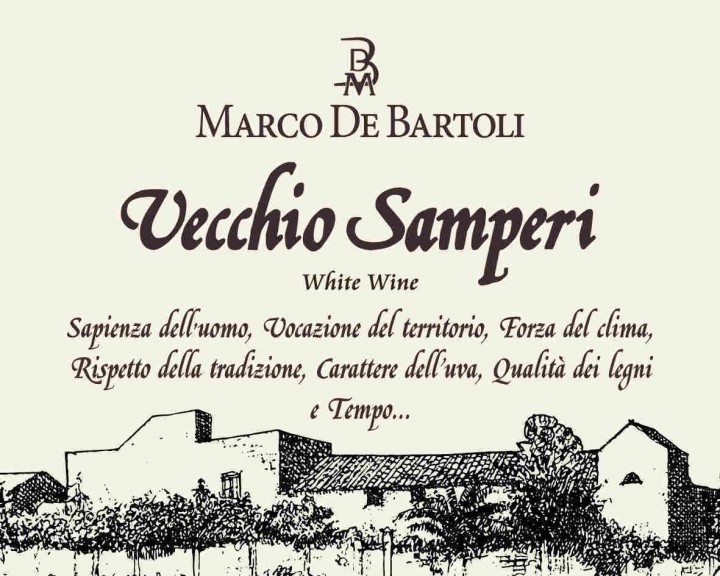 100% Grillo. Vecchio Samperi was Marco De Bartoli’s first wine, first commercially released in 1980. It was his homage to the oldest form of marsala wine. Called stravecchio, this original style was made by the perpetuo method, in other words a solera system. and without fortification (a technique introduced later as the influence of port, madeira and sherry made its way to Sicily). While the modern marsala industry got away from this time-and-labor-intensive aging, Marco's priority was the restoration of it, along with the quality and reputation of the wines of Marsala wine overall. He named the wine for the Samperi contrada, the zone in Marsala where the family estate lies, thus tying the wine directly to its terroir, a completely absent concept in modern-day Marsala. Vecchio Samperi is emphatically not fortified, which is almost unheard of and which in fact disqualifies it from the Marsala DOC.

As with all of De Bartoli's marsala wines, the only grape used is Grillo, grown organically and harvested by hand on the sandy limestone soils of the De Bartoli estat in Samperi. The wine is fermented with natural yeasts and aged in variously sized oak vats; about 5% of the total volume of wine is replaced with wine from the new vintage each year. The average age of the wine in solera is 15 years. As noted above, Vecchio Samperi is unfortified and is nearly dry at 12 grams/liter of residual sugar; its fine acidity balances the little bit of sweetness exquisitely. The 16.5% alcohol level is modest for a marsala.The wine is relatively light in body, highly aromatic and long, nutty and salty on the finish.

*For those who've followed the wine for years: in 2016, there were several physical changes to the visible aspects of Vecchio Samperi. The  traditional 500-ml marsalina bottle was retired in favor of one closer to the 1980 version, a squat 750-ml bottle. Second, the law changed and allowed De Bartoli to drop the designation of vino liquoroso (a term for fortified wines, of which the Samperi is distinctly not one), which they replaced with "perpetuo" to indicate its true nature. And the label now includes a pen-and-ink drawing of the De Bartoli baglio by friend and artist Carlo Lauricella.

93 points
"(17% alcohol): Luminous amber-gold. Explosive aromas of ripe citrus fruits, peach and hazelnut. Fat, sweet and mouthfilling, delivering very intense flavors of peach, hazelnut, butter and orange peel. Finishes relatively sweet and extremely long, not unlike a very high-quality Amontillado. And you really won't notice the alcohol."
Ian D'Agata,
Vinousmedia.com
, December 2015
92 points
"Made in the Solera method, the non-vintage Vecchio Samperi Ventennale is aged on average for 20 years in traditional chestnut casks. This fortified dry wine opens to notes of pinenut and roasted chestnut shell with candied fruit, honey and dried apricot chips. The 17.5% alcohol is present, but also integrated within the greater fleshiness of the fruit. It evolves beautifully in the glass and promises to do the same in the cellar. Drink 2017-2045. "
Monica Larner,
Wine Advocate
, April 2014
SKU/Code:
DB5206-NV
Product Line:
Wine
Dessert
Varietal:
Grillo
Farming Type:
Organic