The name of this state, in the southwest of Mexico, comes from the name of its capital city, Oaxaca. This name comes from the Nahuatl word "Huaxyacac," which refers to a tree called a gauge found around the capital city. The name was originally applied to the Valley of Oaxaca by Nahuatl-speaking Aztecs and passed on to the Spanish during the conquest of the Oaxaca region. There is a saying in Oaxaca: "Para todo mal, mezcal, para todo bien, también" (For everything bad, mezcal; for everything good, too.) Mezcal is made with the heart of the maguey plant, also known as agave and the century plant. The maguey is a hearty succulent which is able to survive southern Mexico's long, dry winter by storing liquid in its heart. The plant's many varieties- some large, others small- all generally have long, sturdy leaves bordered with sharp spines. Mezcal is produced by removing the tough leaves to expose the heart of the plant, which is then roasted in pits, giving the final product a smokey flavor. Both alcoholic and non-alcoholic drinks based on this plant have been consumed in many parts of Mexico since well before the Spanish arrived; the tradition of the making of mezcal has been a strong tradition in the Oaxacan highlands since the colonial period, most likely due to the quality and varieties of agave grown here. It is mezcal, not tequila, that may contain a "worm," which is really a larvae that infests the plants. 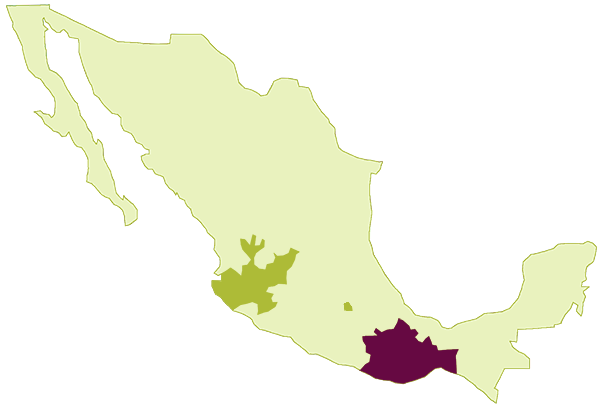